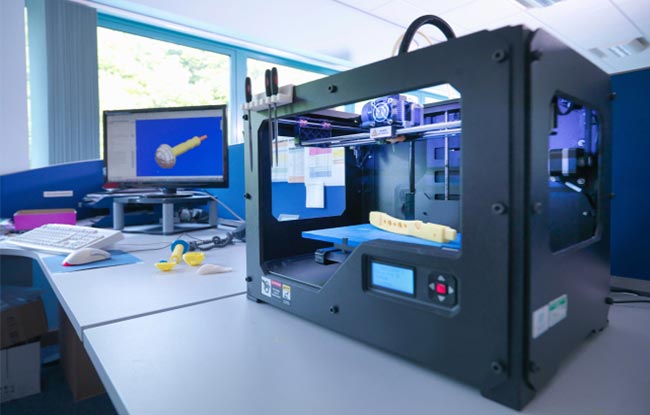 They will be printing our food next!

Well I came across 3D printing rather late, just about 5 years ago. It was a topic that I had dismissed as just having a novelty factor – how wrong I was. 3D printing initially was limited to just printing with plastic, but now all kinds of materials can be 3D printed such as silver and gold for making jewelry and other more exotic materials for electronic components. The price of 3D printers has fallen and the accuracy has risen so what really can we do with 3D printing?

Well 3D printing enables you to produce complex (functional) shapes using less material than traditional manufacturing methods. So what can we actually print now in 2018?

The construction industry has embraced 3D printing and3d-building-giphy-v2 you may be surprised to know that you can print houses now. Apis Cor, a Russian company has developed a 3D printer capable of building a house in just 24 hours and the Dutch firm MX3D is constructing a 40 foot pedestrian bridge in Amsterdam which will open in 2019.

The automobile industry is also very busy 3D printing many components that are used in vehicles and prototype cars now, however, we are still a bit away from building a fully 3D printed car.

People have no problem accepting that we can 3D print houses and cars and even bridges; but what about printing food? 3D food printers initially focused on intricate, decorative and sugar-heavy confectionery. So, when will we be able to eat 3D printed nutritious food for dinner?

Previously, there were certain foodstuffs that a 3D printer was good at such as crackers, certain pasta shapes and printing ready-made meals like pizza. Now we can print food that are similar to those made by mass production, but with ingredients which contain less salt, oil, and artificial additives.

But its not just low end, what about high end restaurants – are they printing food? Well surprisingly enough, a Michelin-starred restaurant in Barcelona prints a seafood puree into an intricate, flower-like shape that resembles sea coral, topped with caviar, sea urchins, and a carrot foam; are you starting to get hungry now?

Some of the top chefs are using 3D printing to do some menial tasks in the kitchen such as basic food preparation, which frees up the chef to perform more creative work – a kind of Robotic Process Automation for the restaurant kitchen!

A restaurant in London had, not only the furniture and utensils 3D printed, but the dinner guests were treated to nine courses made in front of them by the 3D printer.

In a few years time, every restaurant will have a touchscreen on your table for you to place your order, which the software processes and sends to the machines in the kitchen and the 3D printers would then print your meal.

So why don’t you come to my place and I’ll print you a nice dinner?